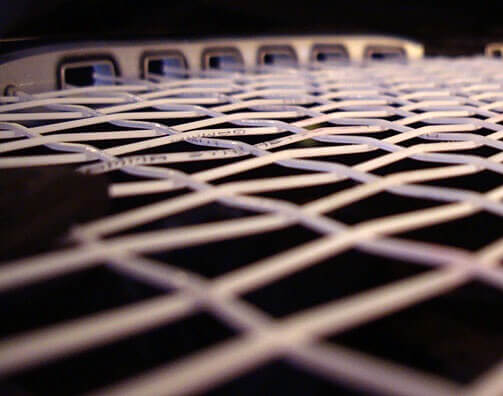 Rule of Thumb – Well, you may have heard the rule of thumb that says you should restring your racket as many times per year as you play per week. So if you play three times a week, you should restring about three times per year. I think this is probably a pretty good rule and, if you don’t want to think too much about restringing or aren’t even sure when is the last time you had your racket restrung, you could follow this rule and be fine.Instead of following the rule of thumb here are the some other clues that you can look for, and that you should pay attention to, to know when to restring a tennis racket:

The feel when you hit the ball – Because your worn strings are losing or have lost their springiness, you may notice a dull or dead feeling when you hit the ball. The ball just doesn’t pop off your racket the way you’re used to, especially on your groundstrokes. You might feel like you have to hit the ball harder just to make it go the same distance it used to.

The length of time since you last restrung – You might feel that you need to restring just because it’s been so long since your racket has had new strings. This could be especially true with a racket that you haven’t played with in quite a while. And while the strings on that racket may look fine, you’ll get so much benefit out of new springy strings that it could be worth the reasonable expense.

Now, if you’ve decided that, hey, it’s time to restring but you aren’t sure exactly how to go about that, for further info speak to Matt